Craig and Secretariat bust some moves 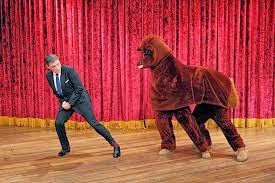 Recently The Late Late Show with Craig Ferguson released the guest line up for Craig's final shows and it reminded me of how bitter/sweet the next several weeks will be.

Ferguson's last show will be Dec. 19 and frankly I don't want him to go. Oh he'll probably move on to something else (at the moment he's got some game show thing that he's hosting on another station) and the next host (James Corden) of The Late Late Show will probably do a good job, but this show with Ferguson has been magical since he took over in 2005.

I remember early on in Craig's (I call him Craig cause he makes me feel that I can) tenure trying to tell a coworker about the show. I had a hard time explaining the show because it was so atypical of talk shows. What you normally see is rote: Host is introduced, host does monologue, host does wacky banter with sidekick/bandleader (of course hard for Craig to do since he's had neither for some time. Technology solved that problem eventually). After the break the first guest comes out, there's a bit, then the next guest, then maybe a musical act, then end of show. It stays that way for years.

Maybe it was Craig's punk sensibilities left over from a misspent youth that led him to break that format. (During the 80s he played in a band called the Bastards of Hell, later renamed Dreamboyz, which also featured current Doctor Who Peter Capaldi). Sensibilities which apparently also flavored his life some years after. Not only did he depart from standard talk show format with his television show, Craig often departed from the formats that he himself would establish for his own show.


It was like watching one big comedy bit being tried, tested, tailored and trimmed to offer a tighter result.

The show was constantly evolving and it was brilliant to see what he and his staff came up with.

Consider the evolution of Geoff Peterson, gay robot skeleton sidekick. The lack of a sidekick had never hurt the show or Craig's performance. In fact, he seems to have the mutant ability to be entertaining without sake of sidekick, cue cards, band or other late night paraphernalia (which he often joked were lacking due to the cheapness of CBS). Deciding at some point it might be fun to have a sidekick, he took Mythbuster's Grant Imahara up on his offer to create a sidekick. In the beginning, Peterson's vocabulary consisted of seven pre-recorded phrases (one of them the often played "balls"). Craig would interact with the robot using the buttons at his desk which set off the phrases. Later, writers handled Peterson's dialogue using an iPad to control it offstage.

Over time, Peterson's vocal abilities were tweaked as were his motor skills (somewhat) and now voiced by Josh Robert Thompson, he's become an integral part of the show. With comedy and improv skills as sharp as Craig's, Thompson is able to keep up in whatever direction the host goes.

What could have been a prop for a bit lasting a few months evolved into a favorite part of the show for many viewers. But comedy evolution is exactly what the show has been about. Quick, pre-opening bits with puppets turned into puppet lip synching songs which turned into elaborate, choreographed lip synching performances featuring puppets, Craig and members of his staff. I think that's when the show really became a party. There was a sort of "oh well, what the hell, let's try it" attitude not seen since Letterman started the Late Show in the 1980s and went on fast food road trips with Zsa Zsa Gabor or tossed stuff off the top of buildings.

Only Craig takes the attitude to the next level, encouraging the audience to stick with him by sheer force of his enthusiasm for life. Every sketch and monologue is an invitation to join the party. It's clear right from the theme song.

It could be his enthusiasm for life that leads him to share so much of his personal life with the audience. Craig has led a life, and come close to death, and as with most people recovering from something he's almost evangelic with his openness.

When Britney Spears was going through some issues, Craig stood apart from the crowd capitalizing on it with "Britney is so messed up" jokes by delivering a monologue in which he encouraged people to cut her some slack. Using his own, misspent youth as an example he encouraged everyone to just let her work it out. And he was able to deliver the lecture in his usual, funny, disarming way.

On Feb. 1, 2008 Craig became an extremely proud citizen of the U.S. and later showed clips of himself taking the test and his swearing in.

We met the members of the Ferguson family when he had on his show his nephew, his sister, and his parents. He even arranged a filmed outting for his mother and RZA of Wu Tang Clan and the two actually corresponded afterward. When his father died, followed later by his mother, he opened respective shows with eulogies for them both.

It was instances such as this that helped Craig achieve an intimacy with the audience whether in the studio or at home. It's perhaps that intimacy combined with his comedic inventiveness that will be missed the most.

He addresses all his guests with an easy familiarity as if they are old friends just hanging for a chat. In most cases this easy familiarity is able to loosen up even the stiffest of guests. By the end of the interview they are willing to choose between ending on an awkward pause, playing the mouth organ, a moment of meditation or one of the other interview-enders Craig and his staff has come up with.

But even during the interview he seems genuinely interested in the guest and most times he probably is. If he uses the sort of guest question cheat sheet found on the desk of other talk show hosts you wouldn't know it. His is a very stream-of-consciousness style of interviewing which helps make the interview more enjoyable for the guest, the audience and more than likely himself as well.

So, I'm going to miss my friend, TV's Craig Ferguson. Late night won't be quite the same without him. Though I look forward to what he has in store for his next incarnation. I'm sure it'll be a party.
Posted by Laura L. Enright at 1:08 AM No comments: